The Tax Cuts and Jobs Act (TCJA): How it impacts individuals at different stages of life. 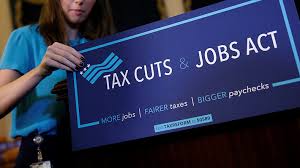 The Tax Cuts and Jobs Act (TCJA): How it impacts individuals at different stages of life.

The Tax Cuts and Jobs Act of 2017 (TCJA) made dramatic changes to the rules for individuals that affect tax planning at all stages of life. These changes require financial planners to reorient their thinking about the advice they offer to individual clients concerning life-stage matters. As this advice is being offered, keep in mind that there are some unanswered questions that await IRS guidance or additional legislative clarification.

The “marriage penalty” is the additional taxes that a couple pays because of their filing status, as compared with the tax that would be owed if they were not married and filed as single. The new law makes some changes that reduce the marriage penalty. Starting in 2018, the first five marginal tax brackets for singles are half those for married persons filing jointly, as compared to only the two lowest brackets (10% and 15%) for 2017.
The marriage penalty has not been completely eliminated. For example, the same $10,000 cap on the itemized deduction for state and local taxes starting in 2018 applies for both married couples and singles.

The tax treatment of alimony changes dramatically for divorce and separation decrees or agreements entered into or modified after 2018. Alimony will no longer be deductible, while payments to the recipient will no longer be taxable. Payments under existing decrees or agreements will continue to be deductible/taxable. Individuals with prenuptial/postnuptial agreements that were written with the expectation of deductibility but who divorce after 2018 may want to try to negotiate different terms than those provided in the agreements (e.g., additional property settlements) to arrive at results acceptable to both parties.

The dependency exemption for a child, which was $4,050 in 2017, has been eliminated for 2018 through 2025. The rules for determining a dependent continue to come into play for various purposes, however, such as the child tax credit, which has been greatly enhanced. The credit, which can be claimed for a child under age 17 at the end of the year, will double to $2,000 in 2018, and $1,400 of the credit is refundable. What’s more, the income phaseouts for claiming the credit have been raised considerably, making more parents eligible. There is also a new $500 nonrefundable child tax credit for a qualifying dependent who is not a qualifying child (e.g., a child living with and supported by parents but too old to be a qualifying child).
There were proposals to repeal the adoption credit and the exclusion for adoption assistance, as well as the exclusion for dependent care assistance, but they were not included in the final law.

The rules for determining the standard deduction for a child who works have not changed. For 2018, the deduction is the greater of $1,050 or earned income plus $350 (but not more than $12,000). A child who works can continue to make contributions to an IRA or Roth IRA.
The computation of the tax on unearned income of a child, however, has been changed. Instead of figuring this tax using the parent’s highest tax rate, starting in 2018 it will be based on the rates for trusts and estates. Parents can continue to opt to report a child’s unearned income as their own under certain conditions. This election must be reexamined in light of all other changes impacting parents’ returns.

In general, the tax-advantaged plans for education—Coverdell education savings accounts (ESAs) and IRC section 529 plans—continue to be available. There have, however, been some changes to note.
529 plans.

Previously, if parents or grandparents wanted to use tax-advantaged savings plans to pay for primary and secondary school, they had to use a Coverdell ESA. Starting in 2018, 529 plans can be used for this purpose. Up to $10,000 can be withdrawn tax free annually to pay for primary and secondary school (public, private, or religious). The limitation applies on a per-student basis, so if a student is the beneficiary of multiple 529 accounts, only a total of $10,000 can be withdrawn tax free in one year from one or more of these accounts. From a planning perspective, given the ever-rising cost of higher education, it probably is advisable to allow funds in 529 plans to grow tax deferred to pay for college or graduate school.
Funds in 529 plans can be rolled over tax free to Achieving a Better Life Experience (ABLE) accounts for disabled individuals. The amount rolled over counts toward the annual contribution limit, which is the same as the annual gift tax exclusion ($15,000 in 2018). Other changes to ABLE accounts are discussed below.

The above-the-line deduction for tuition and fees expired at the end of 2016 and has yet to be extended. Nonetheless, the TCJA did not repeal this deduction (despite proposals to do so), which means that an extender bill may restore the deduction. A proposal to repeal the exclusions for tuition reduction, interest on U.S. savings bonds to pay for higher education, and employer-paid education assistance were not included in the final measure.
No changes were made to the American Opportunity Credit and the Lifetime Learning Credit, which will continue to apply to help defray the cost of higher education.

No changes were made to the above-the-line deduction for student loan interest. The same $2,500 annual limit applies; the modified adjusted gross income limits on eligibility for the deduction continue to be adjusted annually for inflation. The proposal to eliminate this write-off was not included in the final law.

Under the TCJA, student loans that are canceled on account of death or disability are not treated as taxable cancellation of debt income.

The job market currently favors employees, with companies competing for talent with increased wages and enhanced benefits. Still, if an employee changes jobs after 2017, the deduction for expenses of resumés, travel, and other work-related costs is no longer available as an itemized deduction.

Relocating to Another State

America continues to be a highly mobile society, and this likely will not change under the new tax law. Still, individuals should be advised about how new rules under the TCJA will impact them.

The above-the-line deduction for moving expenses has been eliminated starting in 2018 (other than for active members of the military who relocate under military orders), meaning that employers cannot reimburse employees for these costs on a tax-free basis.

While all state and local taxes are deductible in 2017, starting in 2018 there will be a $10,000 cap on the itemized deduction for property taxes and state and local income or sales taxes. This new cap may influence a decision on whether or where a taxpayer chooses to relocate. The following states have no income tax: Alaska, Florida, Nevada, South Dakota, Texas, Washington, and Wyoming. The following states have no sales tax: Alaska, Delaware, Montana, New Hampshire, and Oregon.

The TCJA did not directly change the rules for tax-advantaged retirement savings plans, such as 401(k)s, 403(b)s, and IRAs. Thus, the tax savings available through these plans continue to be important for individuals seeking future financial security.

One change of note is the end to the ability to recharacterize Roth IRA conversions. Thus, if an individual converts some or all of a tax-advantaged retirement savings plan to a Roth IRA in 2018 and the value of the account declines from the date of the conversion, the individual cannot undo the conversion. However, conversions made in 2017 can still be undone by October 15, 2018.

Another change in the TCJA, starting in 2018, is the ability of participants who took plan loans and then terminated employment to contribute the outstanding borrowed amount to the plan of a new employer and avoid a deemed distribution. The rollover to the new plan can be made up to the due date of the return (including extensions) for the year in which the plan loan offset occurs.

One indirect impact of the TCJA has been that some large employers have announced increases in their 401(k) contributions on behalf of employees. This can significantly add to retirement savings.

Caring for the Elderly and Disabled

Individuals who support their elderly parents can continue to deduct the medical costs they pay for their parents on their own returns, even though their parents are not dependents. For 2018, the threshold for itemizing out-of-pocket medical expenses will be 7.5% of adjusted gross income (AGI); this percentage applies regardless of the taxpayer’s age.

Of course, the increased standard deduction amounts that take effect in 2018 will likely lead to fewer taxpayers itemizing, making this provision less significant for some families. In addition, starting in 2019, the threshold for itemizing medical costs is set to rise to 10% of AGI.

In addition to being able to roll over funds from a 529 plan to an ABLE account, as discussed above, there are two additional changes of note. The annual contribution amount (capped at the annual gift tax exclusion) has been temporarily increased by the lesser of the federal poverty line for a one-person household or the individual’s compensation for the taxable year. In addition, contributions to ABLE accounts can be used to claim the retirement saver’s credit. These changes will sunset in 2025.

Credit For Elderly and Permanently Disabled

The modest tax credit for a person age 65 or older or permanently disabled had been slated for repeal, but the final law retained it. It should be noted that only 48,502 of the 150.6 million individual income tax returns file (in 2015) claimed this credit.

There have been no changes to the rules for health savings accounts (HSA). Accordingly, withdrawals for nonmedical purposes from these accounts starting at age 65 remain penalty free.

Under the TCJA, itemized deductions cannot be claimed for theft losses or for casualty losses other than those incurred in a federally declared disaster area. Individuals who suffer such disaster losses can continue to deduct them, but from a planning perspective, it is essential to review insurance policies (including flood insurance) to be sure of adequate coverage.

The Disaster Recovery Act of 2017 provided special rules for victims of Hurricanes Harvey, Irma, and Maria. The TCJA provides some relief for a major disaster occurring after December 31, 2015 (“2016 disasters”), as well as for disasters occurring before January 1, 2018. See FEMA’s website for disaster designations (https://www.fema.gov/disasters).

From a tax perspective, there is still some tax relief available. The 10% early distribution penalty from tax-advantaged retirement savings plans does not apply to hardship distributions for 2016 or 2017 disasters, and a casualty loss deduction can be claimed as an additional standard deduction amount, without regard to the 10%-of-AGI threshold, but with a $500 reduction in the loss.

Keeping Up with Changes

The new law presents an opportunity for planners to have conversations with clients about evaluating their personal situations and changing their planning strategies. It is wise to continue the dialog as IRS guidance is issued, and to modify advice accordingly.

___ Determine the advisability of timing a marriage or divorce in light of TCJA changes.
___ Consider the terms in prenuptial/postnuptial agreements entered into in 2018.
___ Assess the tax savings, if any, that may result from the child tax credit.
___ Review investment holdings in light of the new breakpoints for the 0%/15%/20% rates for qualified dividends and long-term capital gains.
___ Review the options for saving and paying for education in light of TCJA changes.
___ Consider the options for paying for long-term care and savings in ABLE accounts.
___ Review insurance coverage in light of elimination of the deduction for theft and casualty losses (other than federally declared disasters).